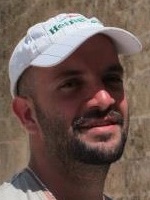 Dário Augusto Borges Oliveira was born in Rio de Janeiro, Brazil in 1983. He is graduated in electrical engineering by the Rio de Janeiro State University (UERJ) and received his M.Sc. and PhD degrees in Electrical Engineering at the Pontifical Catholic University of Rio de Janeiro (Puc-Rio), in 2009 and 2013 respectively. In 2009 he was funded an internship in Instituto Superior Técnico, Portugal, for his M.Sc. research, and in 2011-2012 he developed his PhD research at the Department of Electrical Engineering and Information Technology (TNT) of the University of Hannover, Germany. The fields of interest in his research are image processing, computer vision and pattern recognition applied mainly in the fields of medical imaging, remote sensing, biometrics and more recently in semantics.